September 2013, when we started our work. We had just a month to share our emotions with the people around us. Show them values of their own Home, arouse their feeling and make a contemplative atmosphere to think about it, somehow deeper.

“A window to Earth” was the project which has been introduced to astronomical society on the International Day of Peace at 2012, by Mr. Siavash Saffarianpour, to promote peace and friendship among the people all over the world. People with any kind of educational level, any race and any age were the project’s potential targets.

This window firstly opened by astronauts toward the Earth and made them look and think differently to their home planet. And we were to spread this attitude in our particular community. 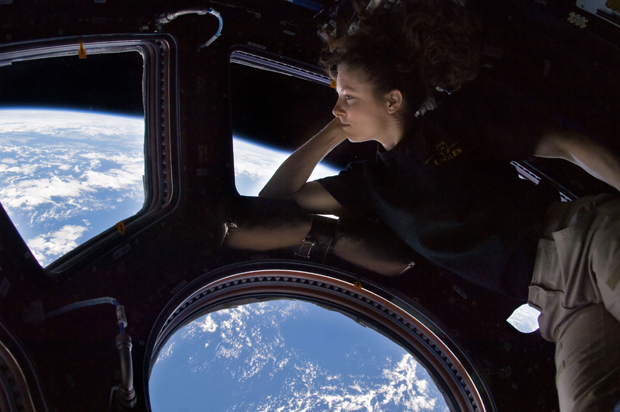 We began our work about a month before the “World Space Week” of 2013 and did our best to reach the exhibition intended for that subject. During all meetings a banner with an overview picture of the ISS and astronauts looking turquoise globe from Cupola module of ISS, along with another one showing first Iranian astronaut Ms. Anoushe Ansari accompanied by her words about the Earth in Persian and English, were always our friends and were denoting as our logos.

Beside of the real challenges for each program to be approved by local authorities and their inherent difficulties to be done, there were many special attractions encouraging all group members to increase their efforts.

Two rural schools in Varzegan, Iran’s East Azerbaijan province were the first locations to visit. They called the whole zone “Earth quake stricken areas” because of the terrifying earth quake occurred about a year before our arrival in August 2012, which caused loss of about 306(said officials) people and turned the most villages to ruins. Collapsed exterior walls of our visited schools and houses under construction were all good evidences showing depth of disaster.

A semitrailer elementary school with half a dozen of students infused me a huge amount of positive energy that made the project’s future brighter and its progress easier. Kids were very kind to new comers and very keen to know about the reason of our travel. This compelled me to talk more about the space and aerospace projects. Specifically, shuttle program, ISS benefits to science development and living at the ISS. I have tried to convey whole sentiments astronauts made during their first viewing of the Earth from up there. And of course got great responds from the children fantasist and creative minds. 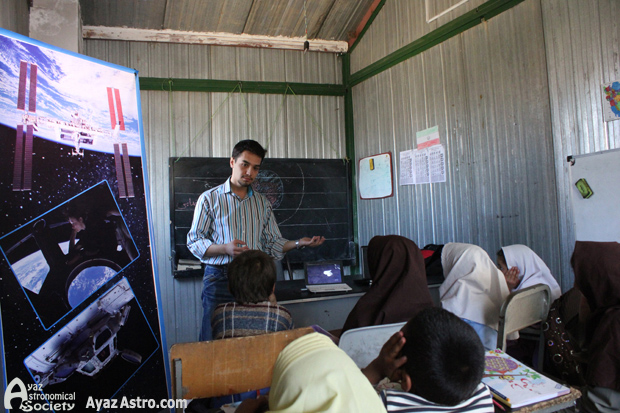 A Sun observing in a clear blue sky was the last stage after a full time virtual space walk with kids. 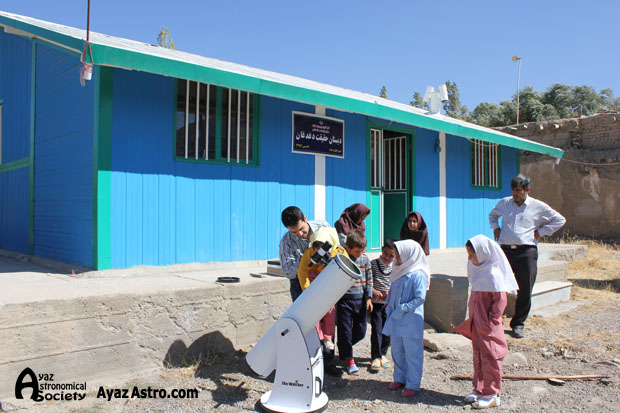 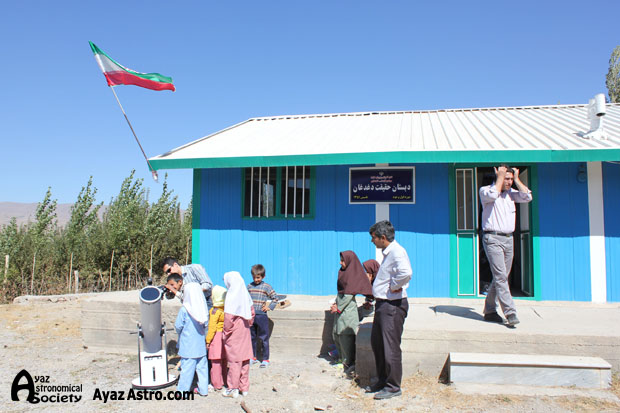 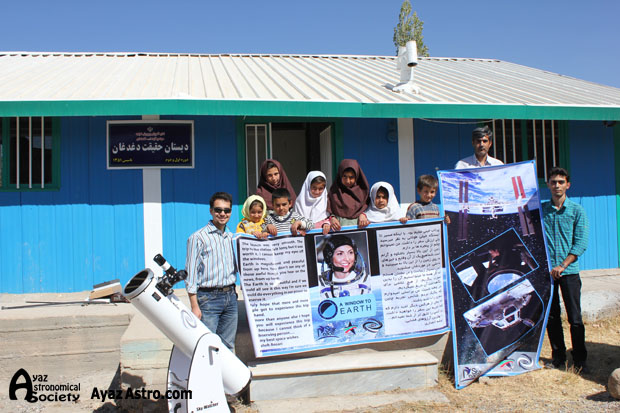 We went to one of the villages coeducational high schools with the great enthusiasm of the first. They gathered in a lab. and shocked us by their highly sophisticated training aids like smart boards and instructing instruments not available even in some large cities. 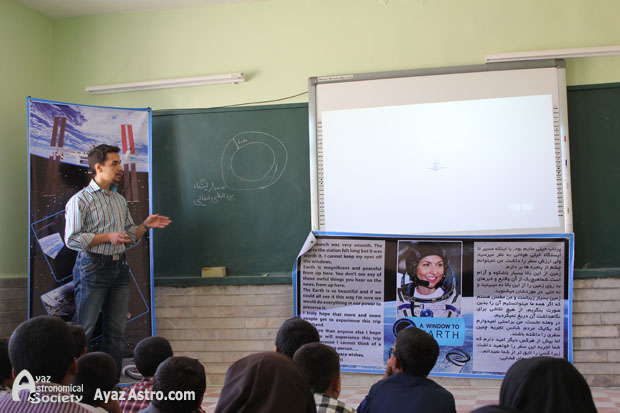 Poor teens had to listen and compare differences of living in outer space with land and believe that Earth is the only home and we have to protect it from all acts may endanger its health. Now it was my turn to shock them by showing first zero-G movie have seen in their lives. And again demonstrate the last plan by the sun pleasing in front of the student’s eyes. Obviously my friends warned them about potential hazards of gazing into sun without proper filters. 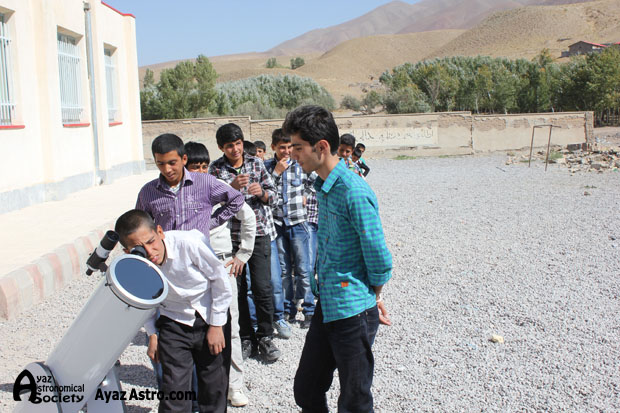 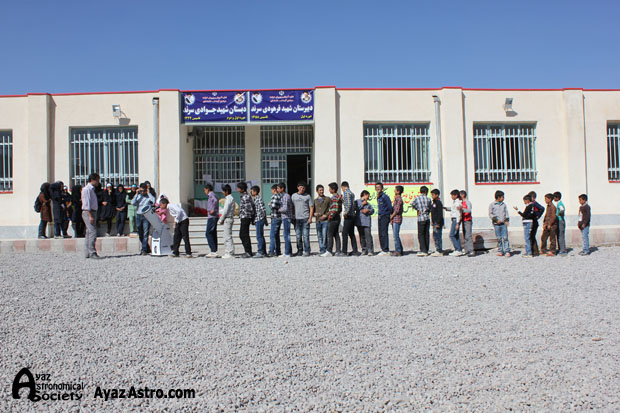 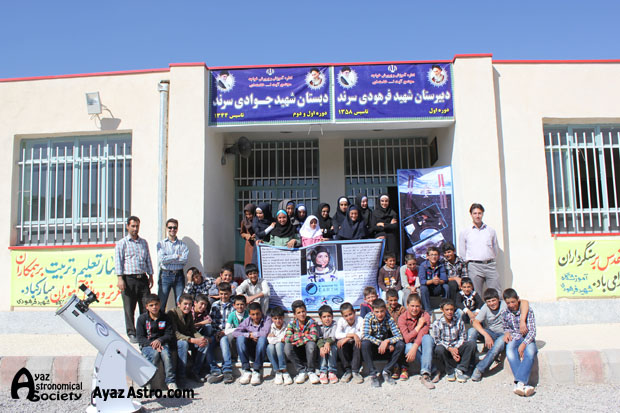 Tabriz International Book fair gave us the opportunity to meet variety of people in a closed space and free time. From an ordinary visitor to well-educated guys, all were amused by the space miracles and could let their minds fly further more out of their accessible dreams. I have found many new friends there and learned many things of them during that mutual information exchange. 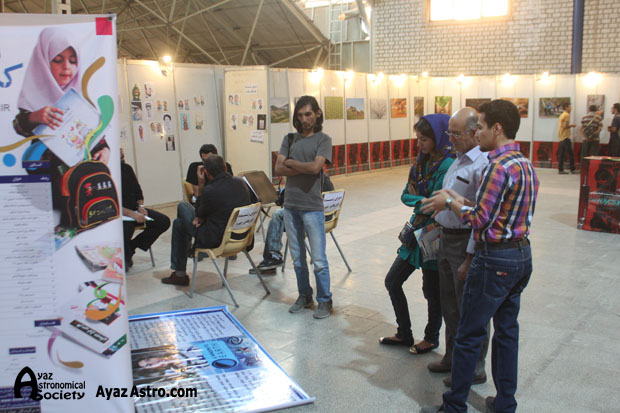 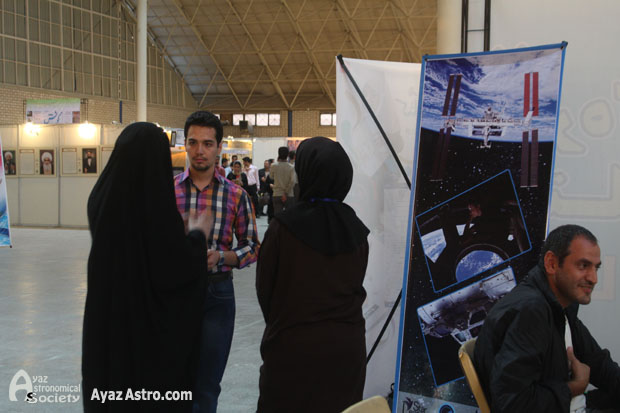 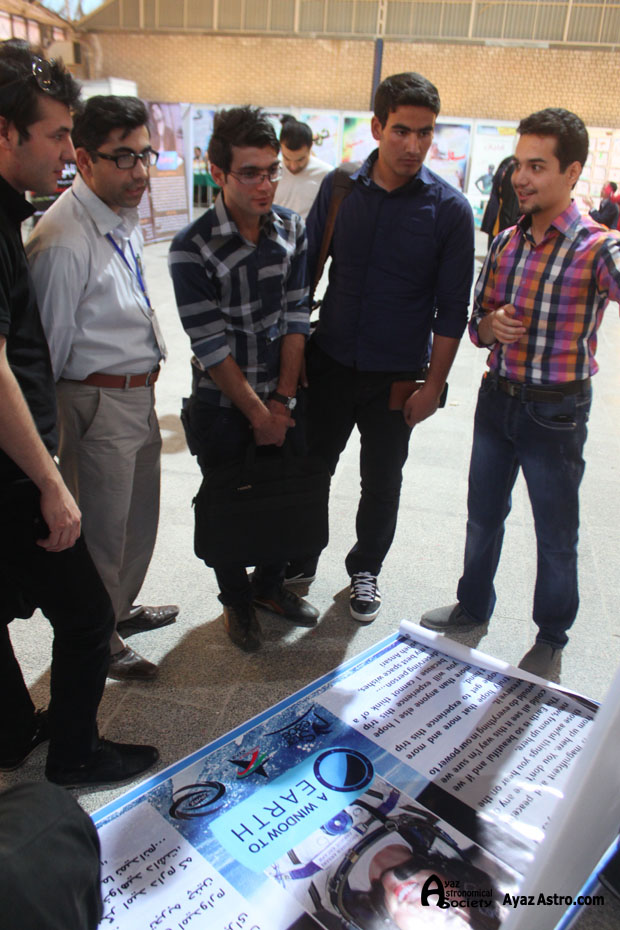 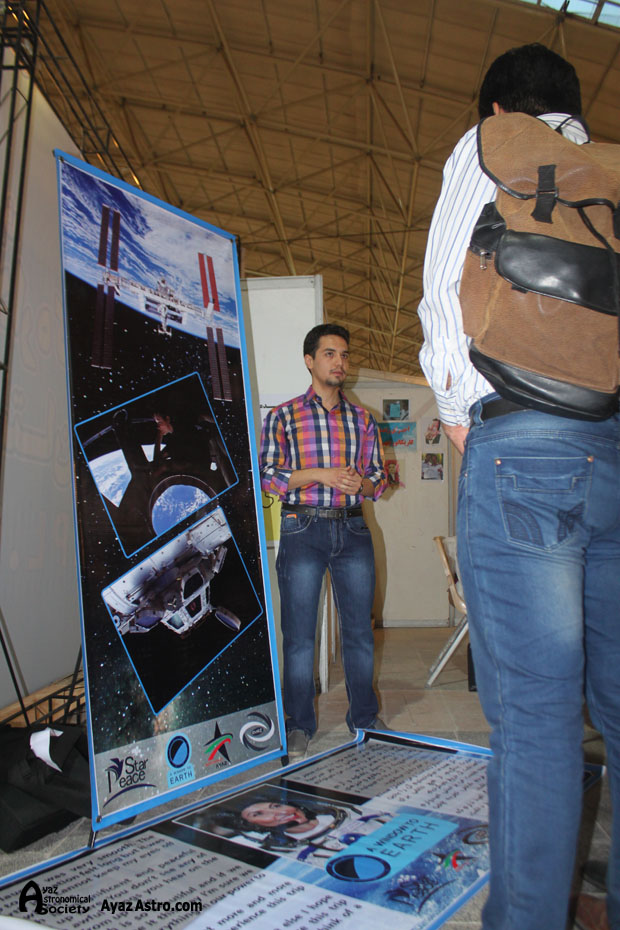 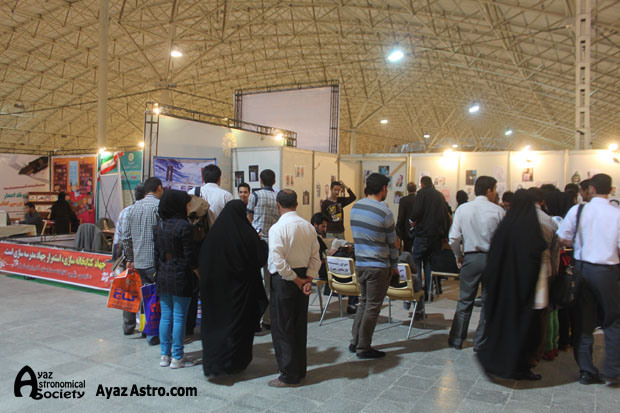 I myself always was looking for a chance to express my warm thanks to firefighters who deal with their lives to provide safety and comfort for citizens. Fortunately this project brought it to me. They welcomed program and gave their precious time to aerospace and peace. That was where I found out the big difference of a challenging job like theirs with other ones, I admit it is very hard to overcome a firefighter’s curiosity! 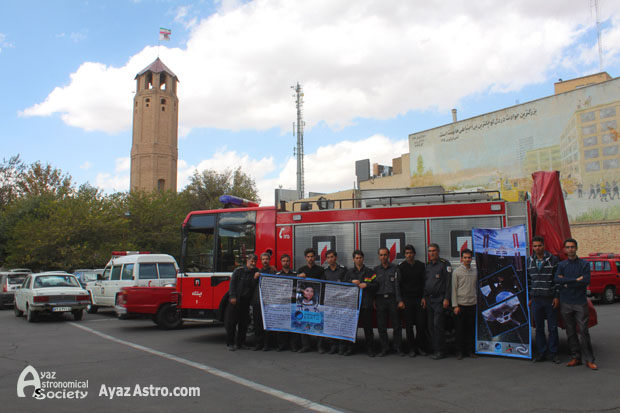 An environment like a university can be very beneficial for most of speakers, because a scientific atmosphere produces a challenging area with clash of comments and makes debates over a subject more fun. Tabriz Payam Noor University gave us a proper time to talk about many aspects of peace promotion by the use of aerospace science and its popularization. This specific program went on by talking about aerospace related sciences and students wanted to investigate their own majors for any possible links with future space missions. 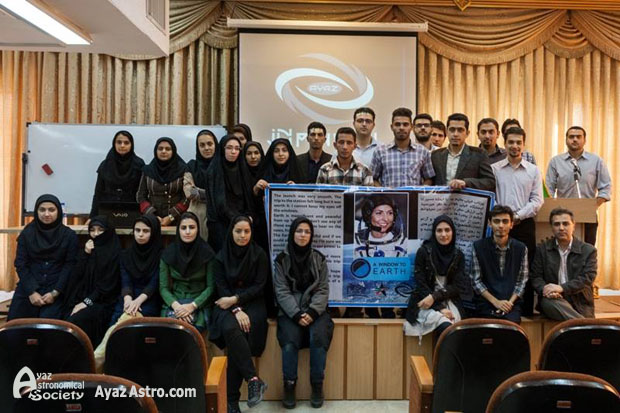 Finally it was the mentioned photo gallery helped us complete the project. Some of the best selected images were put on display with most popular and hi-resolution pictures of space programs. A part of gallery has been designated for “A window to Earth” and visitors were participating in project via getting information about its specifications and showing previously taken photos. 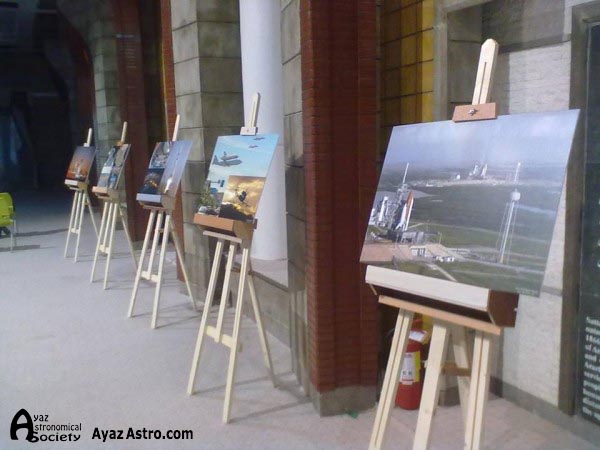 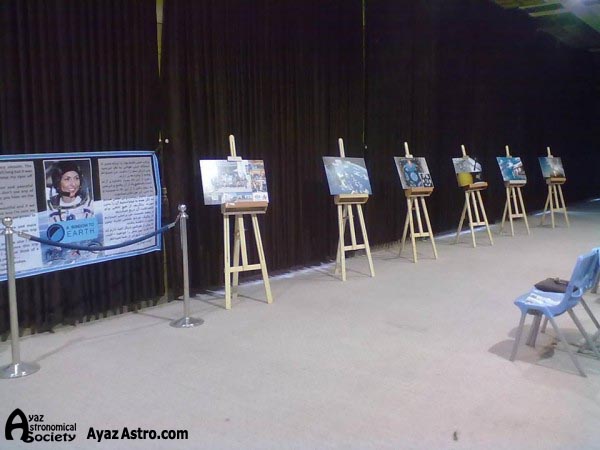 It was so exciting days, and of course very different than other Space Weeks of all years. I think this cannot be an end for the program but a powerful start. A powerful start for a big jump to spread scientific and logical peace anywhere for any single one.